Cat and owner reunited in Blackburn after six years apart!

The idea of a beloved pet going missing and being separated from their owner is heartbreaking for all involved. But, recently, our Blackburn surgery turned this heartbreak into a heartwarming reunion for one cat and its owner – and it’s all thanks to microchipping.

In 2013, cat owner, Mrs Foulkes, moved from Huddersfield to Blackburn, bringing her beloved pet, Tiggy, with her. It was during the move that Tiggy managed to escape, leaving Mrs Foulkes distraught.

Following multiple failed search attempts, Tiggy was nowhere to be found and after a few months, Mrs Foulkes had to move back to Huddersfield.

Six years later, a stray cat who had been found wandering the streets was brought into Animal Trust Blackburn by a good Samaritan. The veterinary team quickly examined the cat who had hurt its paw. As standard practice, the team also checked for a microchip, only to uncover that the cat’s owner’s details matched Mrs Foulkes – the cat was Tiggy who had been missing since 2013!

Commenting on the reunion with her beloved Tiggy, owner, Mrs Foukles said; ‘’When I moved to Blackburn and Tiggy escaped, the whole family was distraught. We had given up hope of ever finding her again, so when I got the call from Animal Trust I was so amazed and overwhelmed!’’

Mrs Foulkes continues; ‘’I’m so glad that all these years ago I choose to have Tiggy microchipped because if I hadn’t there is no way we would have been reunited after all this time. Thanks to the Animal Trust team she is in good health and I’m so happy to have her back.’’ 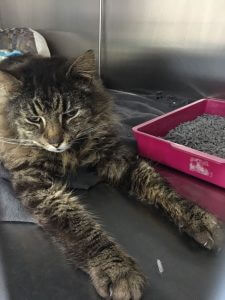 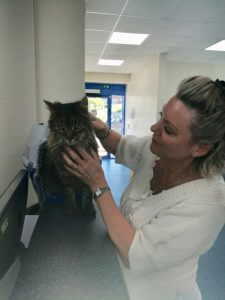 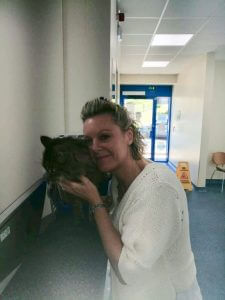 Microchipping is a quick and easy procedure that lasts a lifetime. The microchip itself is a tiny electronic chip which is the same size as a grain of rice. Once it’s implanted into the animal, a scanner is used to identify the microchip identification number, which is registered with the owner’s details. On April 6th 2016, it became a legal requirement for all dogs to be microchipped, and it’s also highly recommended for cats. The procedure can be carried out from 8 weeks of age.

James Baxter, Veterinary Surgeon at Animal Trust Blackburn says; ‘’We are continually working to educate pet owners on the importance of having their animals microchipped and Tiggy’s story is an great example of how impactful they can be. The procedure is really simple and makes a huge difference when a pet goes missing.

James continues; ‘’I’d urge owners who haven’t had their pets microchipped to get it done as soon as possible. We offer free consultations to everyone and can offer advice to pet owners if required before we complete the procedure.’’

Microchipping at Animal Trust costs just £17 and is included in a Puppy/Kitten pack for new pet owners. There is no eligibility criteria to meet when joining Animal Trust and everyone is welcome to access free consultations and fairly priced accessible care.