One of the first animals to be treated at our new veterinary surgery in Birkenhead was 5-year-old Staffordshire Bull Terrier, Ruby, who was brought in by her owner, Kathryn Hamm. Here is their story.

A few days prior to Animal Trust Birkenhead opening, Kathryn noticed that Ruby had a small lump on her lower gum.

“Ruby was panting which is when I noticed a lump. Straight away I felt worried and wanted to get it checked as quickly as possible. I knew Animal Trust was opening nearby so I booked a free consultation online right away.’’ said Kathryn.

During the consultation, lead vet, Rob Pope, discussed the prognosis in more detail. Kathryn explained that Ruby had been eating normally and showed no sign of bleeding gums. Following the examination, Rob diagnosed Ruby with an epulis tumour.

An epulis tumour is one of the most common oral masses found in dogs and they are found in the gum tissue close the dog’s teeth. An epulis is firm and pink in colour and can occur in any breed of dog, although they are more common in Boxers, Pugs and Shih Tzu’s. While epulis tumours are almost always benign, they should be examined by a vet. The discovery of a lump is the most common symptom to be aware of, owners should also look out for increased drooling, bleeding gums, swollen jaw, and tooth loss. 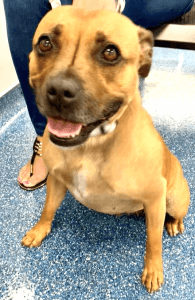 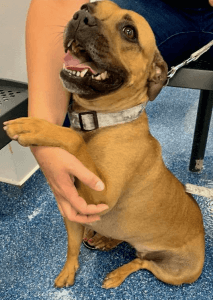 Commenting on the case, lead vet Rob said; “Ruby’s case isn’t uncommon and luckily her owner acted very quickly, which is the right thing to do. It’s exactly why at Animal Trust we offer free consultations to everyone – we want pet owners to be able to bring their animals to us as soon they notice anything out of the ordinary. We hope that by offering free consultations this will allow more owners to do this more often.’’

Rob continued; “Since we opened, the Birkenhead surgery has already received over 1,500 client registrations. I’m really pleased Ruby was brought in to see us. Following her visit, she will undergo surgery to remove the lump and will be monitored during a free consultation afterwards.’’

Kathryn, Ruby’s owner added; “It was a worrying time when I first saw the lump, but having had Ruby examined by Animal Trust so quickly, it has helped massively and given me peace of mind the problem can be resolved.”

“The service we received has been great and we feel lucky that Animal Trust is now based in Birkenhead. Ruby will definitely be visiting in the future whenever she needs to.’’

If you notice or suspect that your pet has a lump (mass), no matter how small, it’s best to have it examined by a vet. Book a free consultation with your local Animal Trust surgery today