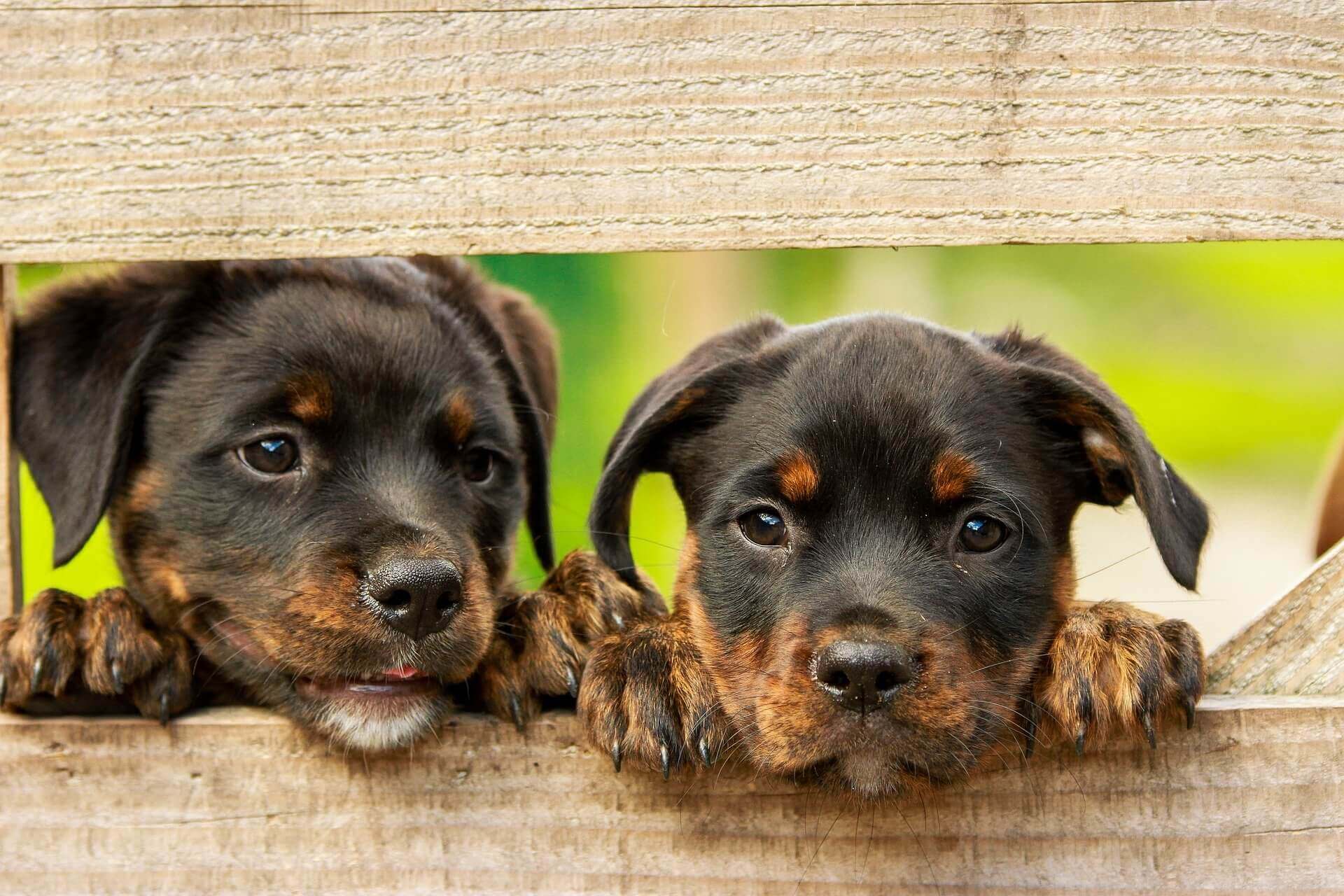 Preparing for a new puppy

Bringing a new puppy into the home is a really exciting time and one that will fill your life with joy and pleasure for many years to come. Congratulations on your new addition to the family!

For a new puppy going into a new environment without its mum or siblings, it can be daunting for them. As an owner, you can help to make this transition a smooth one by being prepared and planning ahead so your puppy gets the best start and lives a long, healthy and happy life. 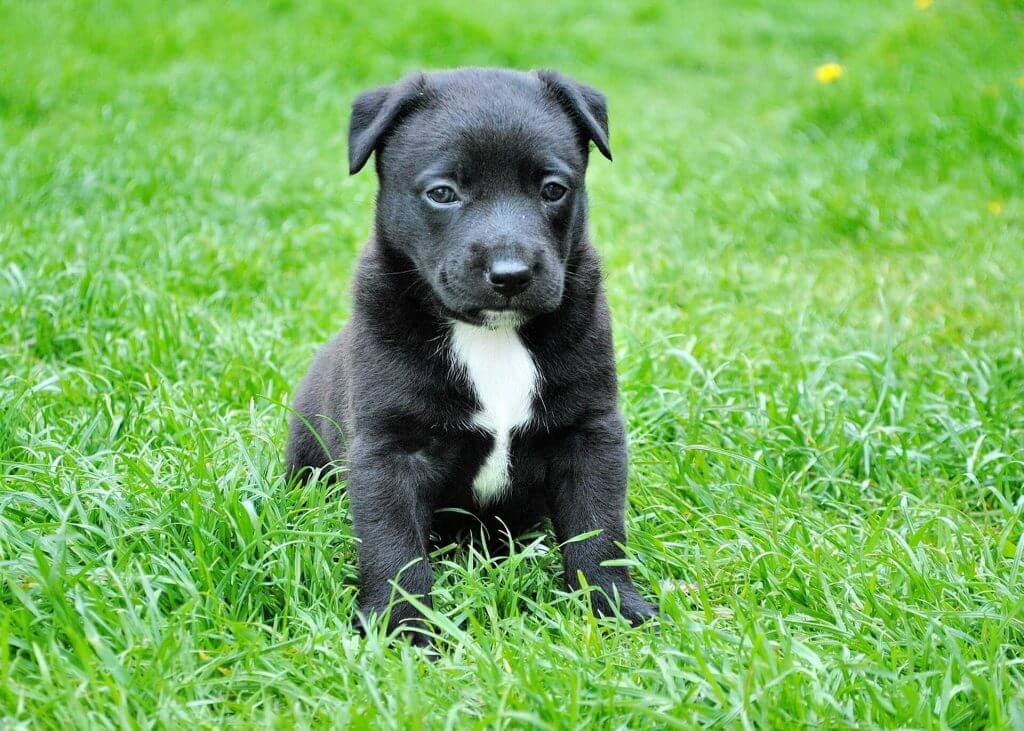 Settling a new puppy into the home

Your puppy has just left its mother and litter-mates to come to unfamiliar surroundings alone. Therefore, it is common for your new addition to take a few days to accept this as their ‘new normal’ and start to come out of their shell. Provide them with a ‘safe place’ where they can hide away if they need to. This can be a crate or a little den with a snuggly blanket and toy. Allowing them to have quiet time to adjust and learn to come to you for affection, treats and play will encourage them to be friendly and not overwhelmed.

Many puppies will have some degree of an upset tummy due to stress and often changes in diet. In order to minimise this, it is recommended to keep your puppy on the same food as the breeder gave them for the first week before starting to change them gradually onto the food you will give them long-term.

Pheromone (Adaptil) and calming oil (Pet Remedy) diffusers can be useful to help reduce stress and are available to purchase from Animal Trust surgeries. The sprays can also be useful in getting your puppy to accept things like crates and car travel.

What to feed a new puppy

Puppies should be fed between 3-4 meals a day until they are six months old. After this age, you can reduce this to two meals a day.

Your puppy’s weight may double or even triple during the first few weeks of life. In addition, their high activity levels mean your puppy may have 3 times the energy needs of an adult dog. Puppies also have a higher requirement for protein, minerals and some vitamins. It is therefore very important that you feed your puppy a life stage appropriate complete diet, i.e., puppy food/junior food up until 1 year of age for small and medium breeds, or until 2 years of age for very large breeds.

Dry food is generally found to be best for your dog’s dental health, although a combination of wet and dry foods can be given.

Homemade and RAW diets should be used with caution. They can be low in calcium and other vitamins which will lead to health problems for your growing puppy. RAW diets can also carry bacteria which can lead to severe illness for your puppy and members of your family. Fresh drinking water should always be available. 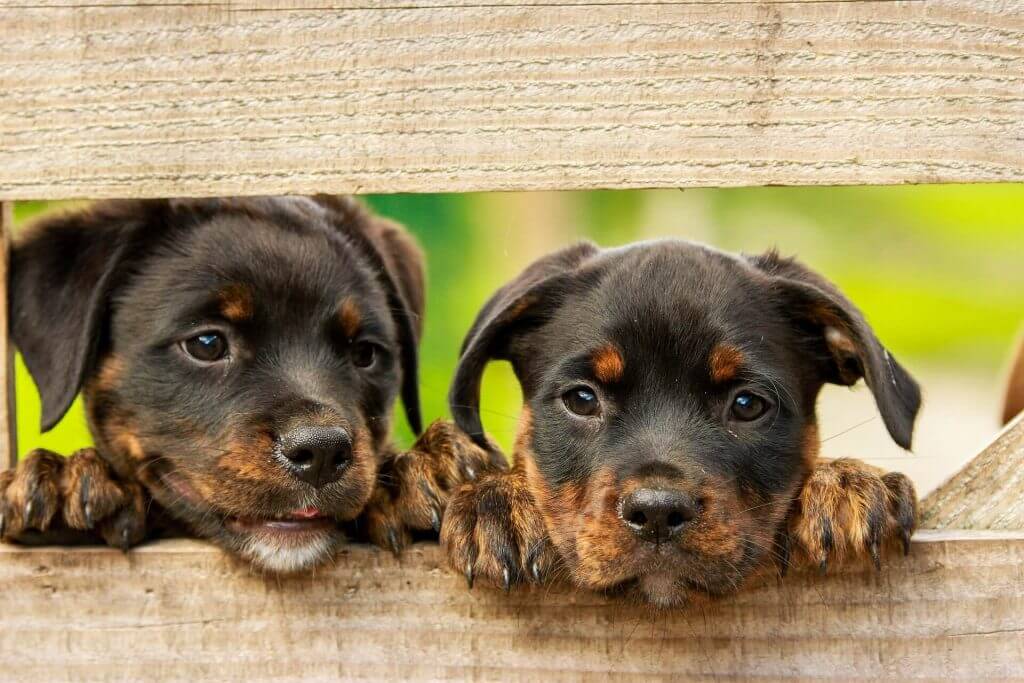 How to socialise a puppy

A large part of a puppy’s socialisation period occurs at the breeder’s home between two and eight weeks of age. Your puppy will, therefore, be more relaxed and confident if he/she has been exposed to being handled, mixed with children, different visitors and other animals during this time.

Once home, you can begin to get your puppy used to gentle handling by multiple people early on. Gentle stroking and providing special treats will make the experience a positive one for your pup. Meeting as many different people, places and animals as possible in their first few months will mean they accept far more as they get older. Introduce your puppy to any crates/carriers you may need to use at a young age. Leaving one open in the room with comfy bedding, toys and treats will encourage your puppy to explore it.

Travelling with your puppy in the car

Expose your puppy to car travel at an early age to ensure they feel secure. Short journeys and treats will again create an association positive. Many pups will be a little car sick initially, so don’t give up and keep going to make the experience positive — most dogs love the car if it means an outing somewhere fun.

It’s also good to get your puppy used to the handling of their feet, ears and mouths early on to avoid problems if they hurt themselves or need examination by a vet in future.

What vaccinations do puppies need?

Puppies should be vaccinated against Canine Distemper, Canine Parvovirus, Canine Hepatitis and usually Leptospirosis. A Kennel cough vaccination is also recommended for any dogs that are attending training classes/clubs, kennels, or where they will be meeting lots of other dogs.

Revaccination should be every 1-3 years dependent on the vaccine used and the risk of infection to individual dogs. We can discuss this with you if you feel your dog is low risk. Learn more about how important dog vaccinations are.

Side effects of vaccinations are extremely rare and are usually limited to a slight temperature or 24 hours of being a little quiet. If you are concerned about your pet following a vaccination contact your local Animal Trust surgery for advice. 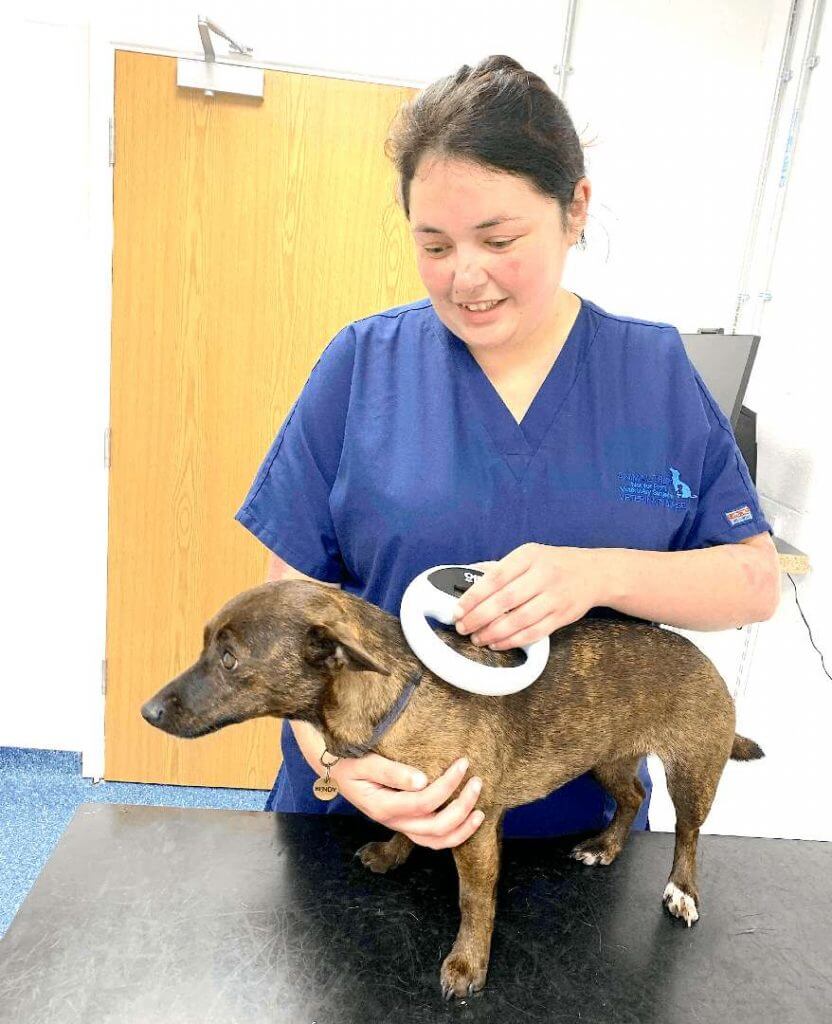 Microchipping a puppy is a legal requirement whereby they are required to be chipped by eight weeks of age. Microchipping costs £17.50 and the procedure is a quick, relatively painless, injection of a chip the size of a grain of rice into the scruff of the neck. The procedure can be completed in a free consultation at Animal Trust and at the same time as your puppy’s first vaccination.

By microchipping your puppy it ensures that they can be reunited with you if they ever go missing or are stolen. Once implanted into the puppy, the microchip is registered with your details using the 15-digit microchip number. The contact details you provide are then linked to the number. If your dog then ever goes missing they can be scanned for their microchip and the registration details contacted.

Should I get puppy Insurance?

Yes, it is advisable that you have some level of insurance in place for your pet. This will help to make decisions much easier if they ever require treatment as financial restrictions can’t interfere.

There are all lots of different plans available and it is best to spend some time researching what is on offer and what level of cover each policy will provide for your pet.

How to care for a puppy’s teeth

You can care for your puppy’s teeth by starting to brush them early on so your pup will be able to get used to the motion, and, therefore tolerate the brushing as they get older.

It’s important to use a pet-friendly toothpaste along with a finger brush or a soft child’s toothbrush to avoid hurting the puppy’s gums. You can also start by using your finger, to help your puppy get used to the motion before you move towards other brushing tools. Some pet toothpaste has a meaty flavour and contain enzymes which help to break down plaque and tartar.

Other products available include:

When should a puppy be neutered?

A puppy should be neutered before their first season. Female puppies can become fertile from their first season around 6-10 months of age which is when we usually recommend they’re neutered. This makes it a more straightforward procedure, with only a small incision in the middle of the tummy to remove their reproductive tract. Neutering before the first season also leaves your dog with a much lower chance of getting mammary gland cancer as they get older, avoids any unwanted pregnancy, false pregnancies and womb infections including pyometra.

There are some cases where a vet will allow a bitch to have their first season or leave them until they are a little older before neutering. This will be discussed on an individual basis with the vet and the dog will require a general anaesthetic, although the risks are lower in young, healthy animals.

Male puppies will be more inclined to start to roam, scent mark and fight with other males if left intact (not neutered). The procedure for male dogs is straightforward, with a small incision to remove both testicles. In addition to the prevention of unwanted litters and the behavioural benefits, neutered males are much less likely to suffer from prostate disease as well as some types of tumours and hernias later in life.

A general anaesthetic is again required, and the risks are low. The age a male dog can be neutered from is dependent on their breed, size, temperament and whether they live with other entire males or females puppies. 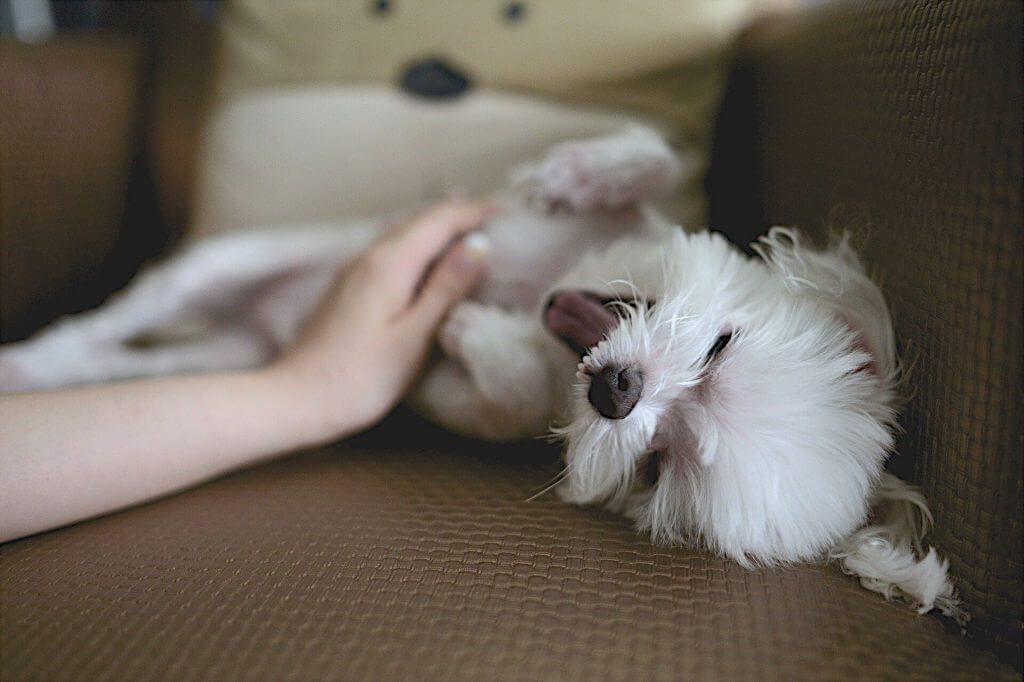 It is illegal to dock (remove part of the tail) on puppies unless they are working dogs of certain breeds. They must be microchipped and accompanied by the certificate to show it was done legally.

Front dewclaws can be removed by a vet in a very young puppy (under 1 week of age). If your puppy has dewclaws, we cannot remove ones with bony attachments except for medical reasons and this would be carried out under general anaesthetic. We can remove hind dewclaws with just skin attachment at the same time as neutering if indicated.

Puppies will pick up worms when they are in the womb and from their mother’s milk. All puppies, therefore, will need worming regularly to prevent them from becoming unwell. It is recommended that puppies are wormed every two weeks until 12 weeks of age, once monthly until six months of age and then every 1-3 months thereafter. This is dependent on the product used and whether your dog lives in a lungworm area.

Puppies can arrive with fleas or pick them up from other animals in the household or when he/she starts to go outside. Fleas are small and often small numbers will not be noticed until they start to become an infestation.

All Animal Trust surgeries offer a puppy starter pack, which includes everything needed to help give your puppy the best start in life. The puppy pack costs £70 and includes; a full health check, both 1st vaccinations, microchipping and flea and worming treatment.

Are you a new owner of a puppy and don't know where to begin? Register at your local Animal Trust clinic today, offering free consultations and fair transparent pricing.