Doug Saved after Swallowing more than he could Chew!

Doug’s Owner, Gavin Millington, was concerned when Doug started to be sick repeatedly. Gavin, who lives locally to Animal Trust Wrexham said; ‘’I’d noticed that Doug really wasn’t his usual self and he was very tired and had gone off his food. When he started vomiting, straight away booked him an appointment at the surgery.’’ 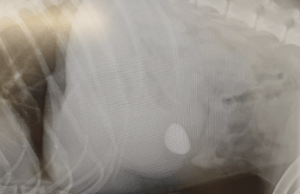 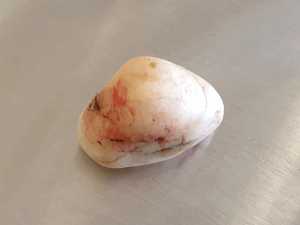 Doug was examined in a free consultation with a vet at our Wrexham surgery, who decided Doug’s condition needed further investigating. After blood tests and

an X-ray, Doug’s problem was clear as it showed he’d swallowed a large stone that had got stuck in his intestines. 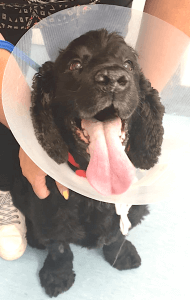 Speaking about the case, the vet commented; ‘’It’s not uncommon for pets to show interest in none edible things while out and about on walks, and it’s likely that Doug picked up the stone on a recent trip to the beach.’’

‘’It is quite easy for dogs to swallow things when they are playing. Doug was lucky that he was brought into us as soon as his owners noticed his symptoms. We were able to operate to remove the stone and he has since made a great recovery.’’

Following Doug’s surgery, his owner, Gavin, commented; ‘’The veterinary team at Animal Trust diagnosed Doug swiftly and provided him with such a great level of care. I’m so pleased with his recovery and to be back walking together again. Although, it will be a while before we venture back to the beach.’’